The Best of The Portuguese Coastline: The Algarve 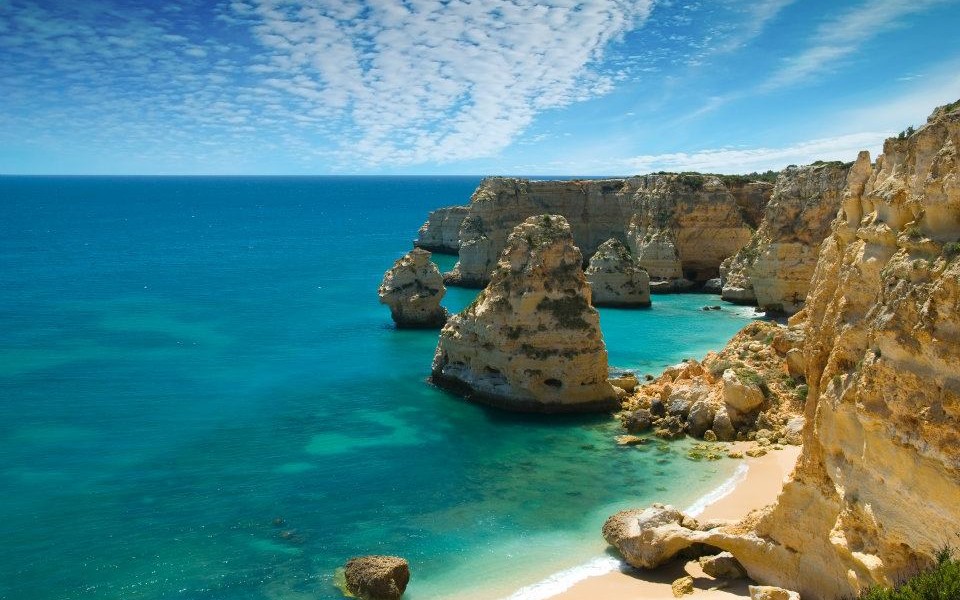 Portugal offers city breaks, beach holidays, adventure and adrenaline-packed experiences and culture, with small and large cities, natural parks and stunning coastline. Outside the cities, Portugal’s beauty unfolds in all its startling variety. There are fantastic opportunities for hiking, and exploring hidden historic villages. With over 800km of coastline, there’s so much to see, and plenty of sea to enjoy – if that’s what ‘floats your boat’.

The food in Portugal is as aspect of the culture that will keep you hooked. Freshly baked bread, olives, cheese, red wine, beautifully fresh fish and meats, the Portuguese have created an art form out of their cuisine. Despite all the food being relatively simple, it is all delicious and rich in flavour.

Portugal’s southernmost region, The Algarve tempts visitors from all over, all year round with its ideal climate for both summer sun and winter activities.

A low annual rainfall average, and plenty of sunlight hours makes the Algarve a particularly attractive holiday destination for those looking for a coastal break, with sandy beaches, rocky coves, resorts lining the bays and plenty to do and see. The rugged Atlantic coast makes for stunning views and interesting walks, and the sea is a delight to both look at and swim in.

Marinas are dotted along the coastline, bringing with them many yachting enthusiasts and sailing hobbyists. Even if you don’t own a boat, there are plenty of opportunities here to rent one, or to join the cruises that will take you along the 200 km of coast without you lifting a finger.

Starting in the west, there’s the Lagos Marina, which is located in one of the largest bays in Europe at four km wide. The city itself has always been linked to a seafaring history, and as such has a rich nautical tradition – here is where many naval excursions were launched during Portugal’s extraordinary Age of Discoveries. Lagos itself lies along the bank of the Rio Bensafrim, with the old town’s quaint cobbled streets enclosed within 16th-century walls The town has a huge range of restaurants with fantastic seafood on offer, and plenty of beaches to choose from.

The Vilamoura marina, built in 1974, is the largest in the Algarve with 825 berths for yachts and boats. The marina comes to life in the evenings, and with the esplanade filled with restaurants, bars and shops, it’s not difficult to see why. It is the perfect location for a relaxed evening of food, drink, people watching and admiring yachts.

The city of Portimão is situated alongside the estuary of the river Arade and the marina forms part of Praia da Rocha’s waterfront. Larger vessels reside here over other ports as the waters are deeper than most of the other coastline waters. This marina is popular with both professional yachting crews and frequent cruisers. Crews train for international tournaments and visitors and enthusiasts practice their diving also, as there are plenty of facilities here.

Nature in the Algarve is truly at its best in the three protected areas: the Vicentina Coast, the Ria Formosa and the Marshland of Castro Marim.

The Vicentina coastal strip lies between Odeceixe and Burgau and really shows off the Algarve breathtaking majesty. The coast here is part of the Natural Park that lies north in Southwest Alentego, and is the longest stretch of protected coast in Portugal. Beaches reside one after the other on this coastline, some of which are fantastic for exploration between the cliffs, others great for swimming in the sea.

The Ria Formosa is a natural park and lagoon system that’s connected with the sea through six inlets. It was recently names as one of the seven natural wonders of Portugal, and boasts a unique view of coastal lagoons which are constantly changing due to currents and tides.

The natural park covers an area of around 18,000 hectares that’s protected from the sea by 5 barrier islands and 2 peninsulas, including the Peninsula of Ancão, Barreta Island, Culatra Island, the Island of Armona, the Island of Tavira, Cabanas Island and the Peninsula of Cacela. This are is a paradise for birdwatchers, hosting more than 20,000 birds on a regular basis during the winter period, plus it’s a major migration route stop for rare species such as the Purple Swamphen.

If you wish to relax in the sun a little more after admiring this natural spectacle, nearby is Faro Island beach. This is a beach that has formed into a long sandspit with just a wall protecting the buildings from the ocean. It is the beginning of the stretch of the Barrier Islands, separated from the mainland by the Ria Formosa, and accessed by a narrow road; therefore it’s not actually an island.

Here you will not only find flawless white sand, but cafes, restaurants, small hotels and trendy bars with music and a wonderful view over the sea. This island, and its 5 sisters are very popular with locals, and especially those wishing to kite surf, jet ski and generally take part in watersports.

One of the most characteristic of Algarve beaches is Praia da Marinha, located between Carvoejro and Albufeira. This is a very popular beach for photographers, with its great seastacks, double-arch rock formations and off-shore splendour – divers and snorkelers also have a lot to see here as the water quality and clarity is exceptional. One of the best ways to appreciate this area and its coastline is to take a boat trip, from either Vilamoura, Albufeira or Portimão. Additionally, the Algarve is the ideal location for any yacht charter excursion. The beauty of the coastline, the pristine beauty of the many beaches and the range of colours that explode as you look out over the water are things that you can only appreciate fully on the water yourself, and in your own time too. Some areas of the coastline, for example some of the hidden grottos, are only accessible from the sea, so why not explore it in style?