Winter Sun in the Canary Islands 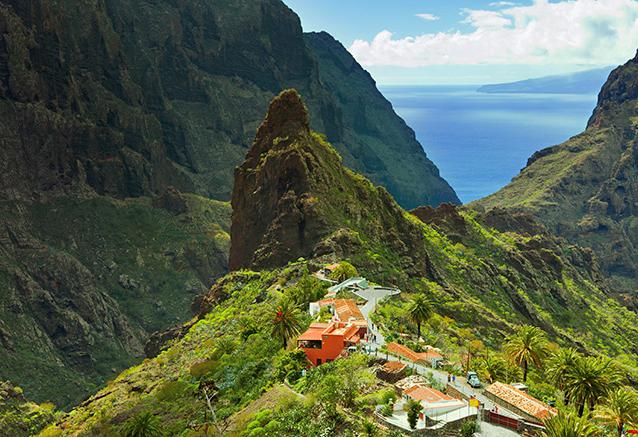 As the frosts kick in in the Northern Hemisphere, the Canary Islands bask in temperatures that vary little from their summer highs – making their stunning coastlines and dramatic landscapes appealing year-round. This Spanish archipelago off the northwest coast of Africa consists of seven main inhabited islands, out of which Tenerife, Gran Canaria, Fuerteventura and Lanzarote are the easiest to get to. Although best known for their amazing beaches like black sand Bollullo on Tenerife, epic Papagayo on Lanzarote and the dunes of Gran Canaria’s Maspalomas, venture off the beaten track and you’ll find otherworldly volcanic landscapes, hidden beaches and lively towns peppered with cutting edge architecture.

Tenerife’s vibrant and accessible capital, Santa Cruz, makes a great base since most of the best sites on the island are accessible from here, including beaches like black sand gem Bollullo and the golden curved bay of Las Teresitas.

The town itself has unexpected attractions including beautiful plazas, lively nightlife, and world-class contemporary architecture. The city’s newest draw, the Tenerife Espacio de las Artes (or TEA), is a futuristic wonder designed by the creators of Tate Modern, made of glass and the island’s famed black volcanic rock. Another modern must see is the spectacular curved Auditorium, home to the Santa Cruz Symphony Orchestra.

For fitness fanatics and those who want to slough off the office lifestyle, Tenerife offers walking and cycling terrain that’s perfect for activity based holidays. Climb or mountain bike the 3,718 metre peak of mount Teide, whose National Park setting draws rock climbers from all over the world, or take the gorgeous three hour trek from Masca down to Masca Bay.

Thanks to artist and architect, César Manrique, the island he loved – with its cactus-strewn panoramas of black lava, emerald vines and flame red peaks – retains its fascinating landmarks and volcanic wonder, outside of the crowded resorts.

Saving the island from the onslaught of high-rises and keeping its architecture true to tradition through his influence on planning in the 60s onwards, Manrique also designed concert halls, swimming pools and restaurants incorporating bubbles of volcanic rock and streams of solid black lava.

Stay in one of the island’s stylish eco-friendly hideaways, boutique hotels or even luxury yurts and walk or cycle to Manrique’s Mirador del Río overlooking the neighbouring island of Graciosa, take a camel ride through the Martian volcanic landscapes of Timanfaya National Park and sample local wines in the subterranean restaurant and lake of Jameos del Agua. The Cesar Manrique Foundation, set in the artist’s former house in the village of Tahiche is a good place to start exploring his legacy.

This round island, the third largest in the Canaries, is home to nearly half its population, and its diverse terrain ranges from lush greenery in the North to arid desert in the South via the dramatic mountains of the interior, that provide an unspoiled escape from the South’s crowded resorts.

The endless dunes of Maspalomas, said to have been formed by a Tsunami, are a must see. But if the resort-based South Coast or rugged North coast beaches are too crowded for your taste, try the more desolate West, including the solitary Güigüi, a bay that is only accessible via boat or on foot.

Hiking opportunities abound in the green Parque Natural de Tamadaba and the pine forests and cacti of southerly Parque Natural de Pilancones, or if you’re more of a history lover, get a bird’s eye view of the cosmopolitan capital of Las Palmas by climbing the tower of its impressive cathedral that took around 400 years to build. Fuerteventura has a stark beauty and some of the best beaches of the Canary Islands. Despite being popular with the British, the resort of Corralejo offers relatively unspoilt expanses of white sands that give way to the desert-like dunes of the Corralejo Nature Reserve – a favourite with kite surfers. In general the east coast offers sheltered swimming opportunities, while the windy west coast is more suited to surfers.

Beyond the beaches, the parched interior is home to charming towns like the whitewashed former capital of Betancuria, and Pajara, with a rustic church decorated in an Aztec style. Elsewhere, traditional windmills built of timber and stone populate the stunning panoramas featuring long dead volcanoes and dramatic lava fields in burnt ochre colours.

The super fit can explore the highlands’ steep slopes on foot or by bike, while others may want to hire a car, taking advantage of well maintained roads to immerse themselves in this barren and immense landscape.