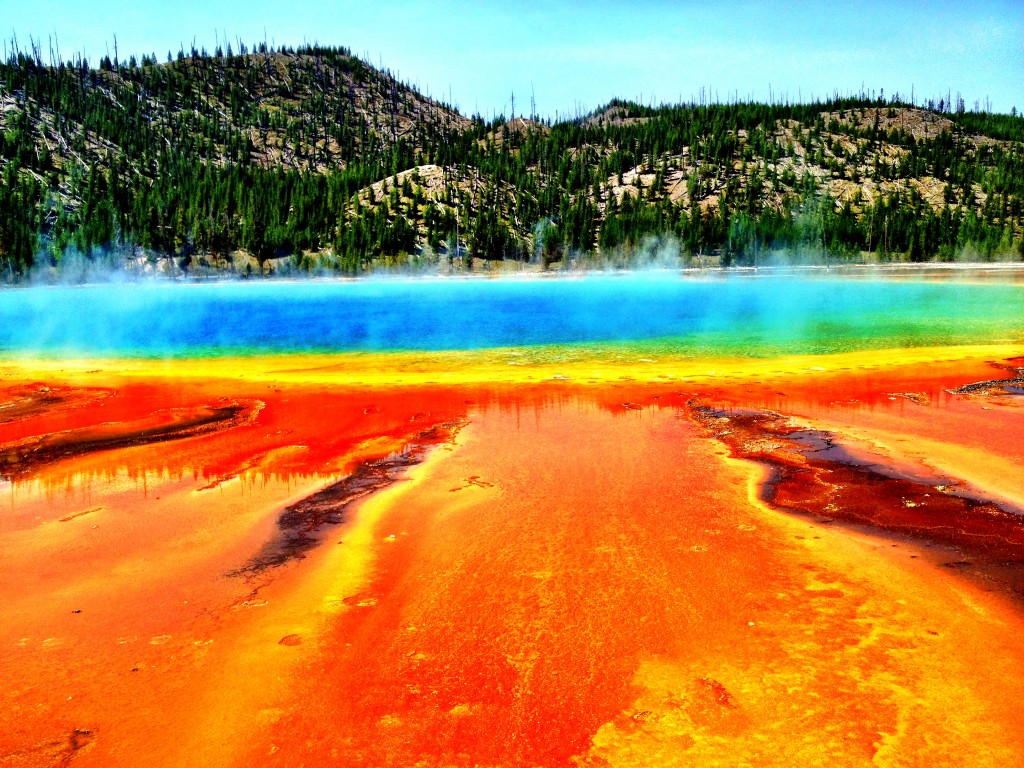 Nature frequently offers up spectacular surprises – often things you couldn’t conjure up in your wildest dreams. These gems are peppered across the earth, so we’re going to take you on a quick virtual tour of some of the most noteworthy of them… The incredible Waitomo Caves were first discovered in 1887 by a Maori Chief and an English surveyor, who ventured into the darkness by raft and candlelight. They couldn’t have been prepared for what they were presented with: a stunning light show put on by thousands of glowworms strung from the limestone ceilings. These creatures are the larvae of a carnivorous fungus gnat, who use their bioluminescence to attract prey. This spectacle can only be seen for five months of the year though (November to March). The Grand Prismatic Spring at Yellowstone National Park offers a dazzling display of rainbow colours, produced by bacteria living in the hot waters. With temperatures reaching 187°C, the bacteria produce colour-altering carotenoids to help them survive the heat and to protect them from sunlight. The result is a brilliant spectrum that reflects the fall in temperature as you move outwards from the centre of the spring.

On the subject of colourful hot springs, the Dallol Hydothermal Field is certainly worth a mention, with its sulphur hills and bubbling pools of green acid. Situated in the Danakil Desert, this vibrant mass of rocky swirls is fed by a constant flow of extremely salty hydrothermal water, which is heated by magma and mixed with minerals and algae. Close to 400 feet below sea level, it holds the record for being the world’s lowest terrestrial volcanic vent. And to boot, it’s also one of the hottest places on earth, averaging 34°C year-round. Nestled in the Siberian mountains north of Mongolia there lies the world’s largest freshwater reservoir by volume: Lake Baikal. It’s crystal clear waters account for 20 percent of the world’s unfrozen freshwater. The lake is also believed to be the oldest on earth, dating back about 25 million years, and the deepest, reaching depths of over 5,000 feet in some parts.

Baikal defies the reputation Siberia has for being an inhospitable environment by supporting roughly 2,000 species of flora and fauna, two-thirds of which cannot be found anywhere else on the globe. Examples include the Baikal seal (or nerpa), which is the only freshwater seal on the planet, and the Baikal oil fish (or golomyanka), which is partly translucent, has no scales, and can withstand dramatic changes in pressure due to special porous bones and a lot of lipids. This is an example of a sort of landscape tongue twister that Nature has created. The island of Luzon contains Taal Lake, which sits in a volcanic caldera. In the centre of that lake is an island, and whose centre is a lake… in which there is another island. So, we have an island on a lake on and island on a lake on an island! This large hot spring is a scalding 93°C on average, but boils at the centre, which means it’s often obscured by a cloud of vapour that floats above the surface. It’s speculated that the lake is about 200 feet deep, though nobody has braved the boiling waters to dive down and confirm that! So salty is Don Juan Pond that the foot-deep pool of water never freezes, even in the Antarctic temperatures, which can drop as low as -40°C.

A Forgotten Forest in Wales A strong winter storm in January 2014 battered the coast of Wales, revealing the petrified remains of a prehistoric forest near the town of Borth. Some believed the jagged stumps of oak and pine to be proof of the mythical kingdom of Cantre’r Gwaelod, the nation’s equivalent of Atlantis. According to local legend, the kingdom was flooded when a distracted maiden allowed a well to overflow. From petrified forests in Wales, we turn to petrified waves in Australia. Standing at 46 feet tall and 360 feet long, Wave Rock is part of the northern side of Hyden Rock, a huge 2.7 billion year old granite outcrop located in Hyden Wildlife Park in Western Australia.

The concave wall is believed to have been formed by the action of water running over the granite, and the colourful streaks are mineral deposits from rainwater run-off.

Chocolate Hills of the Philippines Numbering over 1,500, these limestone mounds in Bohol province, the Philippines, are usually covered in grass. But when the dry season hits, they turn a deep drown – and almost look edible! In 1988, the Chocolate Hills were declared the Philippines’ third National Geological Monument.